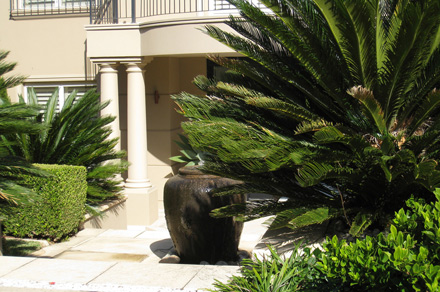 In this blog we look at some of the considerations of the landscape designer that go into delivering a landscape design to meet the client’s brief. In this lovely garden in Glenhaven one of the clients was from the USA and had some quite specific requests.

▪ To bring this large suburban garden together, working with the sloping levels, classical house design and to incorporate a nostalgic South West USA sensibility.
▪ To create an inviting and welcoming entrance from street level
▪ To create minimum levels on a sloping block in order to create a large outdoor entertaining area.
▪ To marry into the design the sentiment of the South West of the United States of America, the birthplace of one of the owners.

▪ The water feature at the pool – stainless steel set against a rendered wall painted in a rich desert red colour.
▪ The water feature at the front entrance – a large stone urn set into a square of river boulders with water bubbling and spilling over the side. At night the urn is backlit and looks spectacular set in the middle of the front entrance path, punctuated with four large Cycad revoluta.
▪ The large rear deck with a plant cut out, overlooking the watercourse at the bottom of the garden.
▪ The planting layers, colour and perfume.

The deck had to straddle a watercourse and to offset the deep drop off to the watercourse excavated soil was deposited behind large boulders then tall planting was incorporated to minimise the sense of depth.

Grafted red Maples and ball shaped Sasanqua Camellias were used to
compliment each other and to create form and structure below the large rear windows. Backhousia citriodora, Oreocallis pinnata (Tree Waratah), Silver Ferns, Gymea Lilly and Bird’s Nest ferns were chosen in the shaded areas to add texture, colour and perfume. Buxus hedges were used to add to the sense of architecture in the garden with red leaved plants sprinkled throughout. Cactus, Yuccas and four Cycad revoluta were used as focal points. Native Violets, Liriope, Mondo Grass, Ornamental Garlic, Trachelospermum jasminoides, Trachelospermum asiaticum, Heeria elegans and small fern varieties were used as as groundcovers.

Sandstone slabs cut onsite to be as large as possible and square to the house at the front with fine off-white gravel between the slabs. The slabs at the rear were laid at 45 degrees to the axis of the house with random large off-white pebbles in between.

The balustrading around the deck, which overlooks a watercourse has Merbau timber laminated posts and top rails with nine strands of tensioned stainless steel wire.

Low Voltage lighting sets the garden off at night. Features and pathways are lit at night, including water features, low walls and planting. Lit deck areas and the large feature trees in the background adds the magic to the space after the sun has gone down and the whole environment can be enjoyed looking out through the home’s extensive rear glazing , tempting you out to smell the perfume of the Night Cactus, Eucalyptus and Gardenias.