Up the garden path: a potted history 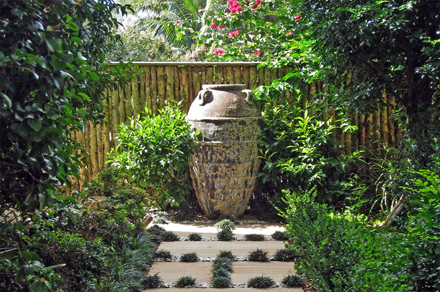 Linking house and garden is the primary consideration for contemporary garden designers and a quick look back through garden design history gives us some important precedents to follow.

Persia is the commonly accepted birthplace of the concept of the garden as a designed space. Shut away from the harsh outside world, the Persian garden became a private oasis, a place to walk in comfort and safety, shaded by trees, cooled by water and adorned with pleasure pavilions. The Persian garden was a place for ‘secret and voluptuous enjoyments’, a paradise on earth.

The Romans enjoyed a happy blend of crisp order and verdant tranquility. Porticos and promenades encouraged walk and conversation, while outdoor rooms invited alfresco dining. The Roman garden, most usually a central courtyard, where water in the form of a pool, fountain or channel was an important element, was designed to refresh the spirit.

The Middle Ages saw the rise of neat, geometric knot garden beds. These gardens were formal and dignified, often with a central fountain symbolizing the conjunction of God and man. By the end of the more austere Middle Ages gardens had re- evolved back into the notion of a pleasure garden, a place for dalliance and knightly pleasures, where there were arbours, pergolas, ornamental fountains and singing birds.

In the wealthy Renaissance era , where visible signs of wealth and status were displayed, the garden began to stretch out beyond the walls and the strict formality of parterre gardens and grandiose man-made lakes stretched as far as the eye could see. The Palace of Versailles in France is a magnificent, living example of this style.

In England in the eighteenth century strict, formal gardens gave way to the freer garden designs of the English Landscape School with landscaped parks surrounding the grandiose mansions of the wealthy. Eventually the style evolved to encompass the idea of sequence, thus laying the groundwork for the appreciation of Chinese and later Japanese garden design, where each part becomes integral to the overall harmonious composition.

The pendulum of garden fashion continued to swing between formal and informal during the following centuries, however by around the 1920′s the pattern of modern garden design was beginning to emerge, a blend between the formal and the informal, underpinned by sound structure.

History is a great teacher and provides us with rich examples to adapt and utilize in our modern twenty first century gardens. Whether we have a small balcony garden, city courtyard or more expansive suburban garden the elements of contemporary garden design – alfresco living, pools and water features, sculpture gardens, vegetable gardens, clipped formal hedges and much more can be traced back to their historical origins. Really we are no different to our ancestors, with the lure of the garden still a powerful force in our contemporary lives.