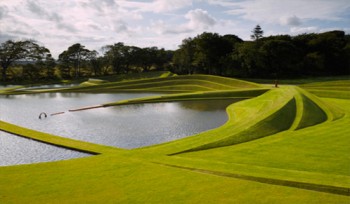 Split by Tony Heywood is typical of his style. Site specific and utilizing unorthodox materials often in symbolic ways, Heywood’s works are at the cutting edge of conceptual garden art. Split was created in 2003 for the International Festival of the Garden at Westonbirt. Split features two reflective, modular flat pack monoliths with planting pockets. The garden is set within undulating mounds of sward, separated by a valley of stone. Heywood sees himself as neither a landscape designer nor a sculptor but a horticultural installation artist. In his own words Heywood’s approach is an “attempt to cross-fertilise the areas of garden design and fine art, using both plant and inert matter.”

Blue Stick Garden was designed by landscape designer Claude Cormier. Cormier’s work celebrates man-made nature in as much as gardens are manufactured and therefore not natural but artificial. Cormier’s designs begin with the genius loci – the complex interactions of natural conditions, current and historic socio-political and cultural identity. The resultant creations connect with the human psyche “physically, sensually, and playfully”. Blue Stick Garden was inspired by the Himalayan blue poppy, which thrives at Metis, where it was originally an installation for the inaugural Metis International Garden Festival in 2000.

Glass Bubble was designed by landscape designer Monika Gora in 2006. The Glass Bubble is a sheltered garden haven that can be used year round, filled with exotic tropical plants. The attractive curvaceous form, which looks like a breaching whale creates a visually arresting and pleasant juxtaposition with the geometric angularity of the surrounding architecture. During the long Swedish winter nights it acts like a welcoming beacon of light and warmth on the shore of Vastra Hamnen. With a challenging microclimate of hot summers, cold winters, salt laden winds and tall overshadowing apartment buildings Gora decided to create a more conducive environment for plant growth, with a structure that is an intriguing mix of garden, architecture and sculpture.

Garden for Australia was designed by landscape designers Taylor Cullity Lethlean with Paul Thompson in 2006. The garden was created as part of the Royal Botanical Gardens in Cranbourne. The garden is educational and displays Australia’s native plants, which vary in their habitats from tropical jungles through alpine and temperate zones to the most arid desert. The aim “is to stimulate visitors, in creative landscape compositions, using the diversity and potential of indigenous flora”. The central feature of the garden, the Red Sand Garden, picks up on the colour of Australia’s red soil and is aligned along a north-south axis. On the eastern side of the garden are the Rockpool Waterway and five exhibition gardens. On the western side are the contrasting Arid and Dry River gardens alongside the Eucalyptus Walk, which also leads to five fingers of different types of woodland.

The Garden of Cosmic Speculation by Charles Jencks is a long terraced earthwork, 120 metres long, twisting away from two crescent ponds. Jencks is a passionate advocate of the latest theories about the universe and its history, and several areas of his garden are designed as visual metaphors for scientific theories. The twisting earthwork, for example is the most dramatic expression of a fractal – the irregular curves produced by repeated subdivision in mathematics. Its form was inspired the feng shui principle of laying bare the bones of the earth. Similar ideas occur in other parts of the garden. Jencks has made an unconventional potager called the Physics Garden, made up of six large metal sculptures that represent the double helix structure of DNA, surrounded by a cell wall of low box and swirling bands of lettuce.

The preceding five projects are just a small taster to some wonderful and inspiring landscape design projects by twenty first century landscape designers. While researching for this series on landscape designers I’ve rediscovered so many wonderful projects, and particularly projects where architecture, landscape and art are melded into one exciting cohesive project, that I’m going to share some more with you in coming blogs. So stay tuned for some more visual garden delights.