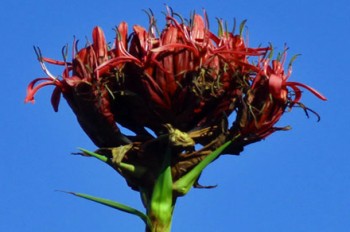 How spectacular! I love Gymea lilies or Doryanthes excelsa, with their majestic tall stems and magnificent large, red flower heads. Gymea lilies are an iconic Australian flower, indigenous to the Sydney Basin, and proudly line Southern Cross Drive along the route from Sydney Airport to the city.

Their meaning is derived from two Greek words – ‘dory’, meaning spear, and anthos, meaning flower, referring to the beacon like flower heads that stand out in the bush. With their big, spectacular flower heads and clumps of luxurious green leaves they make a spectacular addition to the garden when mass planted.

Gymea lilies are also known as flame lily, giant lily, or giant spear lily. They are incredibly tough and grow from an evergreen bulb which has contractile roots that pull the plant down into the soil, where it can resist drought and bush fire, which can trigger it into flowering. Although drought tolerant they do require regular watering when first establishing. Once established moisture will land on their rosetting type foliage and be channelled down to the plant’s centre, almost making them self- watering.

Gymea lilies are suitable as pot specimens and look spectacular when lining a walkway or along the length of a swimming pool. If space permits they look spectacular when mass planted at a point in the garden that needs to command attention, such as at the beginning of a long driveway or at an important arrival point, such as the front entrance.

Gymea lilies grow well in coastal areas from Brisbane to Perth. They can also be grownin cooler climates but can be suffer frost damage. They are resistant to pests and diseases and most importantly will attract nectar feeding birds to your garden.